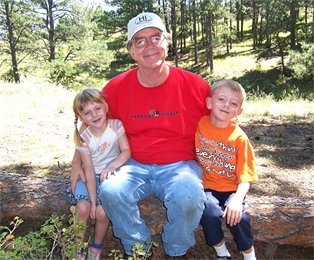 Tim Burrell, the old guy in the middle, has been helping first time home buyers since 1979, before some of his current clients were born. Helping first time home buyers takes more effort, but it is so rewarding to see them skip through the house that will be their home just before the closing. Besides, helping new homeowners lets him buy toys for Sam and Max, who are not in the picture and Jill and Alex who are camping with him in Colorado. The most important thing for you to know about him is he has been married to Judy Burrell since 1969 and he is the father of Laurie Hughes and Jeff Burrell.

Tim is the author of Create A Great Deal, the Art of Real Estate Negotiating.  Since he wrote the book on real estate negotiating, he has the talent to get you the best deal.

Listen to James Nellis, of the Nellis Group in Northern Virginia

Tim has been a Realtor since 1979 and a California Attorney since 1973. The unusual thing about his career is its wide range. He led a team of Realtors in Palos Verdes, CA with RE/MAX at the same time as that he led a team of Realtors with Prudential in Raleigh, NC. He has sold multi-million dollar luxury homes on one end of the spectrum and under $25,000 bank owned properties (REOs) on the other. He has run his own firm, and been an agent for Prudential and RE/MAX. He represents first time homebuyers buying their first home and investors with many, many properties. He does “short sales” for his clients as well as agents around the United States, where he “grinds” the banks, then represents banks selling REOs. He is a member of www.REObroker.com, representing bank owned properties and has been a member of the Institute of Luxury Home Marketing, representing “Rich Buyers and Rich Sellers”. He is a top agent with technology, as a member of the CyberStars ™, but he prefers to talk to people directly. He is a Certified Negotiating Expert (CNE) and the author of a book on negotiating. He has been a builder, creating subdivisions and homes, and an environmental attorney representing citizen’s groups opposing developments. The range of experience has given him a practical education in nearly all parts of real estate.

If you appreciate awards, Tim is a member of RE/MAX Hall of Fame and he is a Legend in Prudential Real Estate. He has stacks of plaques. He has been a speaker at national conventions for Prudential, taught classes in negotiating for Prudential and RE/MAX and helped hundreds of agents who call or line up at his door.

For those of you who like lots of detail, here is the formal resume:

Real Estate Broker since 1979: North Carolina Real Estate Broker affiliated with RE/MAX UNITED, formerly with Prudential Carolinas Realty from May 1996. In 1979, created Burrell Realty, a firm in Palos Verdes (near Los Angeles). In California, sold everything from Condominiums under $75,000 to Estates near $4,000,000 to Office Buildings to Vacant Lots to large Acreage. In the Triangle of North Carolina, sold everything from REOs at $24,900 with serious problems to luxury estates in Cary and North Raleigh. Member of RE/MAX Hall of Fame. A Legend at Prudential Real Estate with 6 consecutive years in the top 1% of agents Nationwide.

Carpenter: Journeyman Carpenter’s card at age 9. Worked his way through Law School as a builder/carpenter.

GPA in the top ten percent of the class.

If you would like to know more about Tim, email me.